(an extension of why 'Men Cry In The Dark')

A Mother-Son relationship is just as emotionally overwhelming as a Mother-Daughter relationship, which makes it important to ensure as a mother you intentionally influence your son in a positive way and focus on developing a healthy bond.

“Men are what their mothers made them!” (Ralph Waldo Emerson)

It is standard practice for a father to make statements to his son such as “ I will make a man out of you!” But in reality it is the Mother-Son relationship that is the barometer which indicates what type of man the son will ultimately develop and grow to become.

It has been proven that no other individual understands a child better than his mother, therefore making it also true that the mother's bond with her son and her influence with him is imperative to his overall development and emotional health. When this bond is healthy and strong a man exhibits the following characteristics: emotional strength, exhibits less behavioral problems, and is a self-confident individual. When this bond is not healthy, strong, or positive it can unfortunately stunt the man’s growth emotionally and psychiatrically.

When a mother and son have an unhealthy bond it can manifest in a multitude of ways, such as:

1. Mama’s Boy -This type of Mother-Son relationship is where the mother makes all the decisions for her son and it is incredibly hard for him to escape this pattern of dependence. As the son grows from a boy to a man this can become problematic in romantic relationships because he will tend to deem his mother as the main priority in his life even before his partner, and this unhealthy relationship can leave his partner feeling empty and unfulfilled and the man feeling lonely and resentful . This scenario has the potential to cause the son to be emotionally unstable over lack of understanding on how to express his emotions to get his needs met .

2. Over Protective Mom - It is important for the mother and son to have a close relationship while growing up to create a secure base for him to develop and explore who he wants to be, but when he matures the mother has to let go and let him be the man that she raised. When the mother has difficulty letting go at the appropriate time of maturity for the son it creates the potential for his perceived lack of confidence in himself.

3. The Spouse Substitute - This type of Mother-Son relationship is defined by the mother replacing her relationship with her son that she should be having with a partner. This can happen whether dad is not present or whether he is and just not emotionally supportive to mom so she develops this relationship with her son. This relationship causes the mother and/or son to rely on each other to fill their emotional needs. The problem is this puts the son at risk for extreme psychological issues that could cause behavior issues, such as the child acting out and as a adult being abusive to mates. This can lead to an inability to connect appropriately with their own partner because of the inappropriate parental connection.

A good start to ensure that your Mother-Son relationship is healthy and balanced and will not prove to be detrimental to your son as he strives to grow and mature as a man is to set healthy boundaries. But, if you identify that you started out on the wrong path with rearing your son and realize a change needs to be made believe that healing and deliverance can take place at any age and stage in life and its never too late to start . For the son’s who have been crying in the dark for years and were unsure of how to get to the root of the problem speak up, reach out, and buckle up, it’s a journey to healing but one well worth the travel!

Marriage Retreat 2020 – Marriage is not a Fairytale!

Conversation With The Queens

Back By Popular Demand!!

To Reach, To Rise, To Reign Women's Brunch

Marriage Retreat 2020 – Marriage is not a Fairytale!

Conversation With The Queens

Back By Popular Demand!! 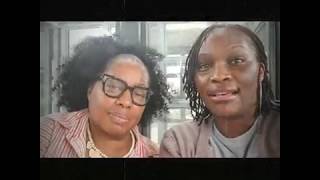 Sistahs on the road!

To Reach, To Rise, To Reign Women's Brunch